Drakesbad Guest Ranch is a historic hot spring resort in the picturesque wilderness of the Warner Valley at the southeastern part of Lassen Volcanic National Park.

A series of hot springs emerge from a hillside just across Hot Springs Creek at a temperature of 140°F. The hot mineral water cools down naturally and then is piped into a swimming pool. The pool temperature is maintained between 95°F during day hours and 103°F at night. Light water chlorination is used.

In addition to hot bathing, visitors of Drakesbad Guest Ranch can enjoy a variety of other recreational activities available in the area. These activities include but aren't limited to fishing, hiking, swimming, and horseback riding.

The ranch offers both day-use and overnight stay. If you wish to stay overnight, book one of the multiple cabins or bungalows. Reservations in advance are required for day guests. You have to reserve one or more activities such as dining, horseback riding, or massage and use the hot springs during your day visit. Do not go to the ranch unless you have reserved services or activities as a guest.
Due to a high elevation and severe winter conditions, the ranch season depends on weather conditions and, typically, starts at the beginning of June remains open until October. Contact Drakesbad Guest Ranch for up-to-date information.

A history of Drakesbad Guest Ranch is dated back to the 1880s when the first structure was built by a local trapper and miner Edward R. Drake. He operated a tavern for local miners, but when mining operations declined, he moved to Prattville. He spent winters in Prattville and came back to the ranch during summers where he kept cattle. In 1900 Edward R. Drake sold his ranch to Alexander Sifford.

Initially, Alexander Sifford came to the area to use mineral water to relieve his nervous exhaustion. After a three-day stay, he ended up buying the property from Drake but permitted Drake to use the area. Alexander Sifford and his wife Ida expanded infrastructure that were built by the previous owner and established a guest ranch.

The Sifford family kept improving the ranch as well as surrounded area by building a kitchen, dining room, and twenty tent platforms. Also, they started to harvest hay in drained willow flats around the property. Four cabins and a fishing pond were built by 1936. Unfortunately, heavy snowstorms during the winter of 1937-1938 caused serious damage to many buildings and even washed out the pond.

The property was rebuilt and a lot of improvements were made. By 1952 Drakesbad Guest Ranch consisted of 28 structures including lodge, kitchen, dining hall, swimming pool, cabins, and utility buildings.

Soon, the Sifford family sold the ranch. The ownership was passed to Don Hummel and the Park Service. The Siffords continued to help to operate the ranch until 1958. In the 1960s, most of the infrastructure on the property was rebuilt and the majority of earlier buildings were demolished. Despite a long history with both ups and downs, Drakesbad Guest Ranch still keeps its doors open for visitors and tourists.

Manzanita Lake and Campground is located in the northeastern part of Lassen Volcanic National Park.

Location: 16.8 miles northwest of Chester • California • USA
Open: Early June to mid-October
Development: Rustic
Amenities: Restaurant, massage, horseback riding
Hiking distance: Short
Road Access: Any vehicle when the road is open
Restrictions: No camping, no fires, no dogs
Day-use fees: The hot springs can be used if you order services or activities at the ranch 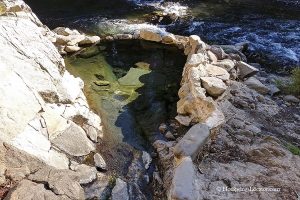 On the forks bear left or follow the signs.

Do not rely on smartphones or car GPS navigators, it can show wrong routes. Follow the driving directions provided above.