A hydrothermal field in Nevada, Brady's Hot Springs is located along Highway I-80, 20 miles northeast of Fernley. Currently, hot mineral water doesn’t flow to the surface. No bathing is available at the hot springs. The geothermal potential of this area is used by Geothermal Food Processors for food dehydration.

Early settlers and travelers also called the spot Springs of False Hopes. While water they encountered at the springs could be used for drinking after it cooled down, there was no vegetation good for their livestock.

The first developments at the springs began in the 1880s. Initially, there was an attempt to extract boric acid out of the mineral water which failed. Later, the water from hot springs was used for a U.S. Highway 40 service station to supply a bathhouse and swimming pool. In 1929 a concrete pool was built on-site and its remains are still seen on there.

In the later part of the 1950s and beginning of 1960s geothermal exploration and development began by the Magma Power Company. Several geothermal wells were drilled and by 1979 their number was up to 12. The length of wells was ranging from 341 feet to 1.4 miles deep with temperature going all the way up to 417F.

In 1977 a geothermal food dehydration plant was built at the hot springs by the Geothermal Food Processor, Inc and it is still in operation today.

No public access to the hot springs is available. However, steaming fumarole in action is visible from the highway. 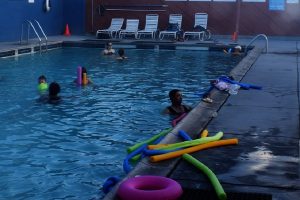